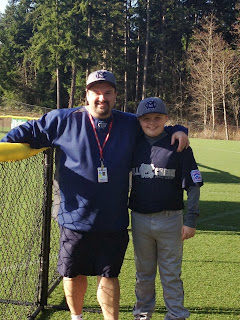 If you've attended a youth sports game, at some point someone has uttered the phrase, "coach's kid."

You might hear it after an ugly interaction between coach and player.
"Must be the coach's kid."

Or, after the shortstop makes two errors:

"Why is that kid playing shortstop?"
"Coach's kid," is the answer as the two parents share a smirk and a nod.

Most coaches try to think of their child as just another player when they are on the field. Most fail, because it's virtually impossible. Actually, it's plain silly. When is your child not your child? While I might try to forget that my pride and joy is on the team, it burbles to the surface. After all, that's my kid. With that, comes a larger breath of emotions. We all want our kids to succeed. We want them to feel the joy of the game-winning hit or the diving catch. The coach, like any parent, feels that extra burst of pride when something like that happens. On the other hand, boy does it ever burn when it seems like your child has relocated their head into his or her rear end.

You can see the steam coming out of my ears when my kid looks at strike three. And, the coach's kid feels that pressure. No matter how even-keeled the parent, the coach's kid has that added level of disappointment. "I've let myself down. I've let the team down. And, I've disappointed my dad." Some of that is human nature -- and some of that is the look of death or the sharp comment, "You've GOT to swing the bat!" -- a jab that is typically only directed at the coach's kid.

I recall a rough practice exchange with my son during his 10-year-old season. He'd been struggling playing up with the 12-year-olds, and it seemed his brain was M.I.A on that evening. While commiserating with a fellow coach, he said, "Coaching your kids is one of the hardest things you'll ever do." He's certainly correct. But, it's also one of the greatest. It's a delicate balancing act that doesn't always work.